But again and again, irrational people are turning to violence to silence others. This is not acceptable anywhere, but it is particularly galling in a civilized country.

Police are investigating after masked activists reportedly assaulted security guards as they barged into the university building, smashed windows, hurled smoke bombs and set off a fire alarm.

The security guards were hospitalised, which is apparently how they spell it over there. 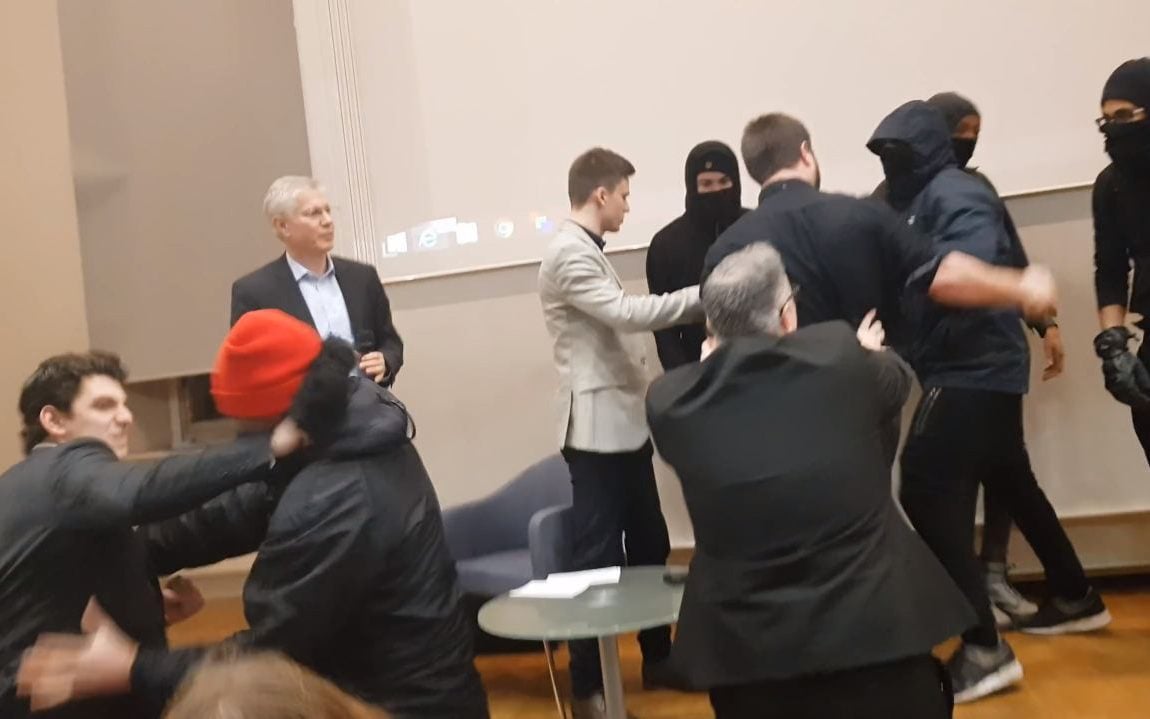 The protesters called themselves London Antifa. Is there a Texas Antifa?

“They stormed in went straight to the stage, up to me and the speakers and started harassing us and the audience. Fire alarms went off – they had dropped smoke bombs. The security was nowhere to be seen”.

As the masked activists burst into the room, a group of King’s College students from the audience stood up and began chanting “No fascists on campus”.

They unfurled a banner and began shouting into a megaphone which a fellow audience member attempted to grab, provoking an violent altercation.

What is it about the speaker that demanded violence?

Benjamin, who uses the pseudonym Sargon of Akkad for his YouTube channel, is known for his anti-feminist and anti-progressive views, and has been described as an “alt right” sympathiser.

He was discussing the philosophy of Objectivism alongside Dr Brook, who is chair of the Board of Directors at the Ayn Rand Institute.

[So, not genocide, murder of children, paedophilia, fish without chips, or the casual use of the letter zed? Just philosophy of Objectivism? Anti-feminism and anti-progressivism? Bloody ‘ell]

The university’s president and principal, Professor Edward Byrne, said he was “shocked” by the “aggressive and violent” behaviour of the protests which left staff “traumatised”, with some physically assaulted.

It is what you do with that shock that matters, Professor. Your university has been physically attacked by anarchists whose only tool is intimidation. You can complain about being traumatised, or you can stand up for free expression.

I finished this post, then found a Canadian example.

Free speech warrior Dr. Jordan Peterson was greeted by protestors at Queen’s University in Canada who called him a Nazi, smashed a stained glass window, and threatened to “lock them in and burn it down.”

Professor Peterson, a University of Toronto psychology professor, was speaking in support of his bestselling book, 12 Rules for Life: An Antidote to Chaos.

There is no antidote for irony.