My trip into British comedic archaeology took me to these two shows, now on Amazon Prime: 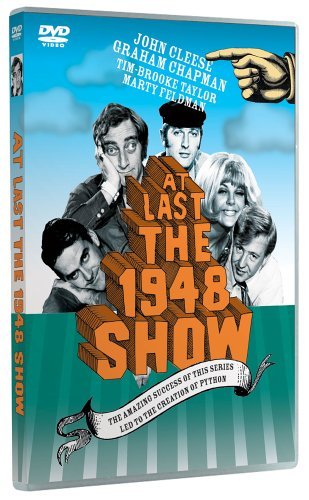 These were originally on the tele (along with a penguin) in 1967. Notice that individuals the Monte Python troupe were in each, and that apparently Eric Idle wandered over to the “1948 Show” for some sketches.  This is the genesis of Python, which came in 1969.

Expect fewer laughs as compared to Python, and some even more rudimentary production values. Lots of send-ups of TV, and the very Python habit of spoofing uptight British manners by placing one stuffy character in contact with someone rapidly demonstrating odd behavior. Nod, nod. Wink wink.

It’s a shame that Marty Feldman was never a part of the Monte Python group. He’s very funny here.

At one point a character stares into the camera and says “And now for something completely different.”  I almost fell off my chair.

This entry was posted in TV, Uncategorized and tagged Media. Bookmark the permalink.