In a move that’s a slap across the face of every patriotic American, the Southern Methodist University in Texas relocated its annual 9/11 memorial flag display from in front of the campus’ iconic Dallas Hall to a less visible area to avoid exposing the community to “triggering, harmful, or harassing” messages.

The original story on the Dallas News website states that the phrasing in quotes above is incorrect. They say the University claims all displays need to move…triggering or not. I smell BS. You and I know the likely reason no lawn displays will be allowed on the lawn. 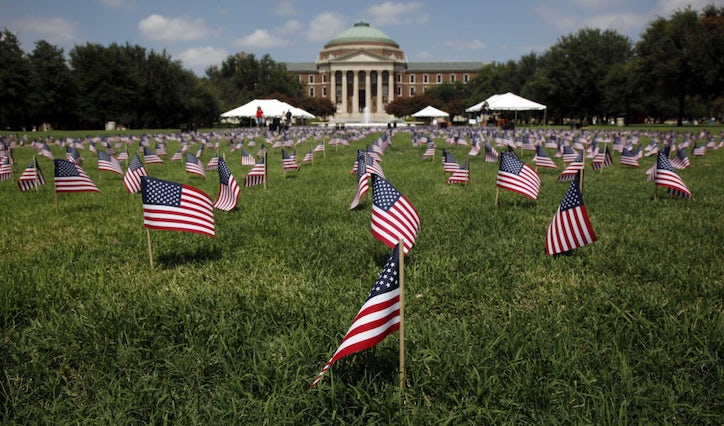 The memorial is the work of the Young Americans for Freedom (YAF) student group. Since 2015 YAF has organized the 9/11 Never Forget Project, which YAF Chairman Grant Wolf describes as “a memorial of 2,977 American flags in a visually stunning display that represents each of the 2,977 Americans murdered by Al Qaeda terrorists in September 2001.”

On July 24, SMU YAF received a notification in response to our request that the University had unilaterally changed its policy on what it calls “Memorial Lawn displays.” The email informed YAF that displays are now forbidden on Dallas Hall Lawn, and would instead be relegated to MoMac Park, a location unquestionably less visible and further removed from students’ everyday activities.

This is in Texas.  Somehow, I think this will not stand.