Oh my.  Gut rumblings from Our Oaf.

Now, I am not a doctor.  I have no ability to diagnose anything more complicated than a stubbed toe.  My “medical” opinion on anything, then, is worth just about as much as legal advice from me these days- absolutely nothing.  If I were to express such an opinion, why would anyone, in light of that, take me the least little bit seriously?

That said, I’m an almost 65 year old adult with a wealth of both real-world and learned experience gained over the years.  I read extensively.  I’ve acquired a lot of years of formal education past high school.  I have also had the occasion during my life to know and be in fairly close contact with family members and friends who have suffered from Parkinson’s Disease.

Bill Schmalfeldt announced to the world that he suffered from that condition close to a decade ago.  He has made progress reports over the years that indicate progressive degradation or loss of various functions.  He has asked that people who read what he writes take into account that his mental facilities are probably slipping.  He has said he gave up his license to drive and could not walk any distance without using a walker  He purchased a mobility scooter.  He stated that traveling any distance was virtually impossible for him, and even dangerous.  He retired on full disability from regular employment.

All of those things are consistent with a person who has Parkinson’s.  It is a horrible disease and in my experience, once it strikes its progression is inexorable.  I have never heard anything other than anecdotal accounts of persons who have experienced a significant remission from the conditions that mark its progress.

Yet within the past year or so Bill Schmalfeldt has regained the ability to drive.  He obtained a new driver’s license and purchased a vehicle, facts which he fairly obviously attempted to conceal from the wider world.  He drove that vehicle unaccompanied for long distances.  He became employed.  He apparently abandoned his mobility scooter and no longer requires a “Life Alert” system tethering him to his residence.  He even set up a GoFundMe web page soliciting funds for a planned 10,000+ mile drive around the country on a fairly grueling schedule.  All of these things, along with others not mentioned, are inconsistent with being a person who has been diagnosed with Parkinson’s Disease and who has stated the sort of conditions that mark its progress I have noted several paragraphs above.

Doi I think that The Oaf is faking having Parkinson’s- Fakinsons, if you will?  What would it matter if I did?  Why would my opinion be more important or carry any more weight than that of a qualified medical professional?  Schmalfeldt, despite his oversharing about virtually everything else, has been completely silent as far as posting any current medical information about himself on this topic, so people are just left to speculate on what is going on.

I’ll tell you what I do think, though.  I do think that Bill Schmalfeldt’s Parkinson’s symptoms always seem to be way more in evidence every time he gets near a courtroom. 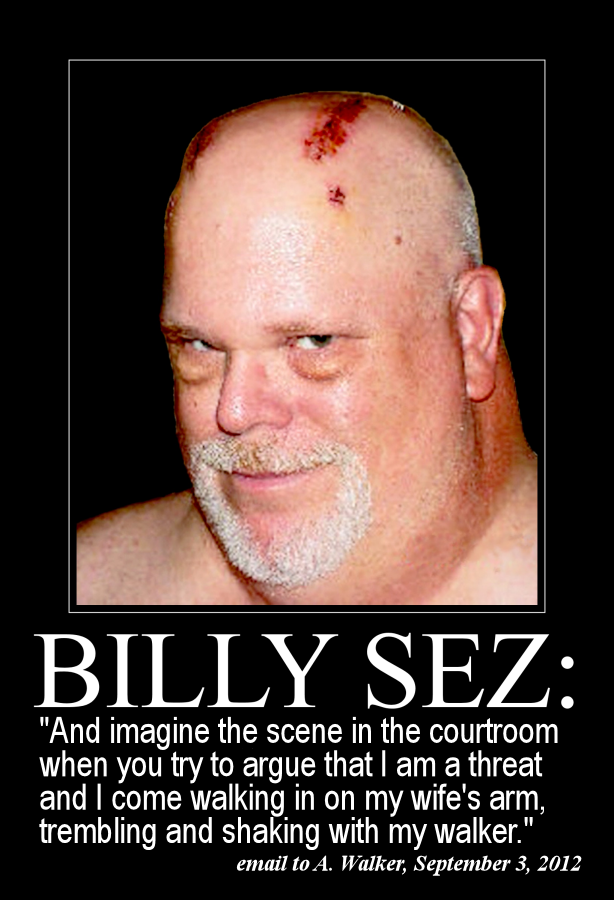 So who is the coward here?  And, in case the Portly Plaintiff happens by, he should please notice my name at the bottom of this post.

This entry was posted in Parkinson's Disease, Stupid and Evil, The Oaf. Bookmark the permalink.

36 Responses to “Fakinsons” and Cowardice