Nobody Else Gives Him Anything but Horse Poop

Bill Schmalfeldt has filed an answer to John Hoge’s accusations in Hoge v. Kimberlin et al.  Unfortunately. Schmalfeldt’s response has to be compared to Hoge’s complaint in order to make sense.  There’s a page break in the original, but I moved his answers to #17 and #18 together:

And here are the statements which line up with Bill’s denials: 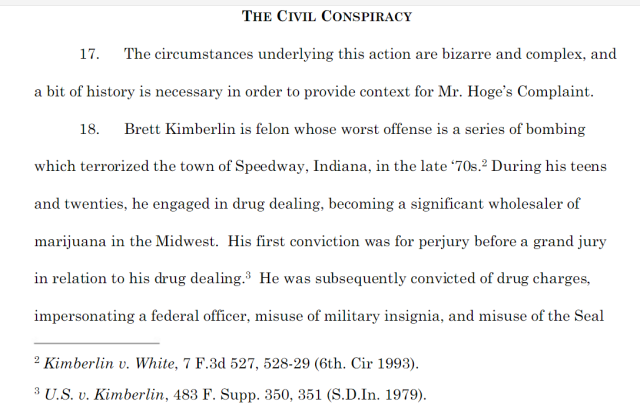 This is a story John Hoge has had to tell a few times by now.

So, Bill denies in #17 that the circumstances are bizarre, complex and require a bit of history. You ever try to explain this stuff to someone?

This story totally takes a lot of explaining.

And that’s what John did with the next item.  Rightly, John Hoge starts in #18  with the bombings in Speedway, Indiana.

Schmalfeldt on the other hand denies enough knowledge or information to form a belief.

Is it possible that all this time, Bill Schmalfeldt has had  no idea who Brett Kimberlin really is?  I’m going to help.

Other than a tub of horse poop, hardly anybody gives Bill stuff, let alone cr 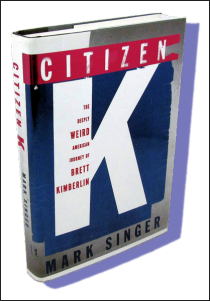 edit for being able to learn about his situation.  Bill, if you’re reading this, I’m sending you a valuable gift:

A used, second-hand copy of Brett Kimberlin’s AUTHORIZED biography Citizen K is on the way!

Mark Singer’s classic true crime story is significant in that it is the most complete documentation of the actual crimes, trials and odd escapades of Brett Coleman Kimberlin.

I suggest starting with chapter 11, which begins in the spring of 1978, an important year as it turns out.  An exciting tale about a theft of $152,000 weaves seamlessly into an odd story about a young girl.  Way too young.

The bombings, the murder.  The psychics, Carl DeLong’s suicide, the hypnosis, the plot to kill the prosecutor, and even the Impala.  It’s all there.

By the way, I do not encourage anyone at all to ever send Bill Schmalfeldt anything. I’m ignoring my own advice to make a point.  But please leave Bill alone in real life.

A few weeks ago, Bill wrote me an email asking me to confirm my home address. It was not all that hard to dig up Bill’s address, since he’s sued half the people who I know online.  In most situations relating to Team Kimberlin, I’d consider unwanted physical mail to be possible intimidation.  Bill knows I mean him no harm.  This mail won’t arrive ticking.

Write about him, joke about him, but please do not send horse poop or anything else.  Rather than mail anything directly, I’m having a bookseller deliver it.

I want to send this to Schmalfeldt for a reason.

Bill Schmalfeldt, and anyone who would associate with Kimberlin should be aware of his past.  Not just for their own personal safety, but so that when someone asks, they can’t say they “deny knowledge or information sufficient to form a belief.”  You can’t pretend you don’t know.

If Osborne or Ferguson need a copy, they can let me know.

10 Responses to Nobody Else Gives Him Anything but Horse Poop