My hobby requires me to read a lot of court documents.  I think most folks sympathize that it all can get a bit foggy. William Ferguson wants to appear by phone for a short hearing about a week from now.  Bill Schmalfeldt has made a similar request.

From Ferguson’s response to a motion to quash a subpoena to appear at a hearing in vitro…or something like that:  Read it all at Hogewash!

Writer’s block is a bear, I must admit.  When he finally cleared up the blockage, this came out.

A word or two about adverbs.  I don’t see them much in scholarly work or good legal writing.  Partly, I’m sure because their use seem to indicate trying too hard. Conspiratorially seems especially poor for a defendant who is being accused of conspiring with others.

The phrase “Ferguson can’t quite understand…” also stands out.

I’m sure it was followed by something complex.  Not, for instance “what girls want…” or “How the hell I got mixed up with a nut like Kimberlin…”  I’m sorry now that I didn’t cut and paste more.

I know that one co-defendant feigns ignorance of the intricacies of the United State’s Postal Service when it is important. He later proved his inability to focus on this complex system when he then mailed at least a dozen documents in individual envelopes to the exact same set of address — never pausing to think that one box per recipient might be enough.  This is the kind of thinking which might cause Amazon to send my new chess set in one long envelope, and 16 individual padded envelopes. 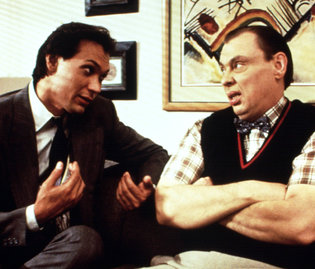 Another co-defendant suffers physical and cognitive disabilities which are so specific as to make unassisted travel to Chicago a joy, but to Maryland an impossibility.  Air travel is quite comfortable in first class — which I’d suggest for anyone with broad shoulders.

I think it’s too early to plead imbecility. Plenty of time for that.

By the way, the narrative seems to be that this case is all about the Kimberlin phrase “Lawsuits for the rest of their lives.”

Try not to focus on that.  Really, should things work out properly, there will be no need for additional lawsuits.  If you can’t quite understand…get a lawyer.