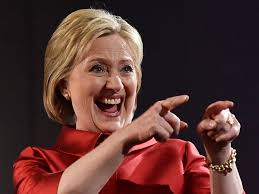 We have programmed the candidate to pick out one person in a crowd, pretend she knows them, and act surprised.  Run pointing and smiling subroutine.

This entry was posted in Presidential Politics, Uncategorized and tagged Hillary, Trump. Bookmark the permalink.