It means ‘afraid of Turks.’ 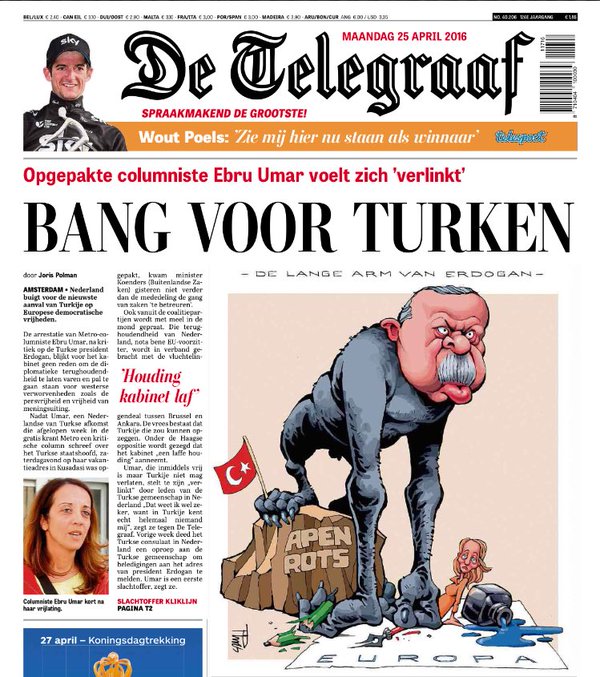 As Western leaders like Angela Merkel cave into the authoritarian demands of Turkish President Recep Tayyip Erdogan in crushing free speech, journalists and cartoonists are fighting back. After a Dutch journalist was arrested in Turkey this weekend for allegedly insulting President Recep Tayyip Erdogan, the most-read newspaper in the Netherlands threw down the gauntlet and published a front-page editorial cartoon that shows Erdogan as an ape crushing Europe’s free speech. Since Erdogan demands the prosecution of journalists even outside of Turkey who insult him, the publication could force another confrontation with the aspiring dictator. In the meantime, the West (including the United States) continue to prop up Erdogan as he destroys secular government in Turkey, arrests journalists, and denies the most basic forms of free speech.

A Dutch journalist has been detained in Turkey.  A German comedian is being investigated (with Chancellor Merkel’s approval) for insulting Erdogan.  Is there free speech in Turkey (a NATO nation) and supposed democracy?

I’m not sure why I’m so upset at this.  It seems that these events are more data points in the examination of where Europe is headed.  The more examples of abuse of civil rights there, the less we can count on Europe as a stable partner.  I might be overstating things, but I’m not the first to point out that it feels like 1939.  Or 1945.

Of course in some places it feels like the first century A.D.

Most people reading this have strong stomachs, so let me lay it out as baldly as I can: Much of what we loosely call the Western world will not survive this century, and much of it will effectively disappear within our lifetimes, including many if not most Western European countries. There’ll probably still be a geographical area on the map marked as Italy or the Netherlands–probably–just as in Istanbul there’s still a building called St. Sophia’s Cathedral. But it’s not a cathedral; it’s merely a designation for a piece of real estate. Likewise, Italy and the Netherlands will merely be designations for real estate. The challenge for those who reckon Western civilization is on balance better than the alternatives is to figure out a way to save at least some parts of the West.  — Mark Steyn