Now you just don’t hear stuff like that very often. 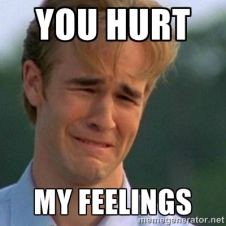 The new wave of political correctness has muzzled millions.Gone are the days of playful teasing without being reprimanded, whether it be from your principal or your local law enforcement. The days of Sandlot style, good old-fashion bullying have been squashed by the fun police better known as the regressive liberal left. Any mean spirited words are immediately taken as threat, hate speech, or sexual harassment. Picking on the fat kid at lunch no longer ends in laughter; you could end up in handcuffs.

Playful bullying builds character; it shapes the humans we become. It all traces back to our core human evolution. The weak are left in the dust as the strong carry on to better the Earth and its society. The idea of playful teasing is reminiscent of our human nature. If someone is fat, we instinctively add a negative value to them. Your subconscious attributes obesity to lack of self-respect, lack of self-control, and an accelerated death.

I don’t actually agree, but as it turns out, I enjoy reading things with which I disagree. Playful teasing and playful bullying are not what I remember from school.  I actually some real cruelty in middle school.  God help you if you were fat, or spoke with a lisp.

On the other hand, not every micro-aggression needs a referee.