A Dave Alexander & Company Rough Literal Translation of the News

One wonders, for example, what French president François Hollande made of Kerry’s comment that the murders of the staff of Charlie Hebdo possessed “a sort of particularized focus and perhaps even a legitimacy in terms of – not a legitimacy, but a rationale that you could attach yourself to somehow and say, okay, they’re really angry because of this and that. This Friday was absolutely indiscriminate. It wasn’t to aggrieve one particular sense of wrong.” 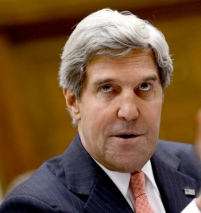 John.  Why the long face, John?

“Yes.  ‘Cause we’ve all wanted to shoot up a newspaper for cartoons insulting our prophets. Okay, okay.  I see your rationale.  But this random thing.  Man.  They lost me there.  They didn’t even do it because of something.” — Rough, literal translation of John Kerry, Vietnam Veteran and Secretary of State

At some point, this madness will end and the world will turn to us and ask,”What the hell were you thinking? Were you really that stupid?”

We have screwed up so many things in the last few years, and some folks figure we’ll never fix it all.  I think most things will work out eventually, but not in the best way.

If honor and courage prevail, when the history of the 21st century is written, there will be a chapter on Obama, Clinton and Kerry.  It will be a difficult read.

This entry was posted in Uncategorized and tagged A Rough Literal Translation of the News, freedom, Stupid and Evil. Bookmark the permalink.