Mrs. Clinton, The Die is Now Cast — According to Ooobie

Tell it to the judge, Hillary.

I am delighted to say that the entire intelligence community has jumped down her throat in response. You can’t just call something something it isn’t (other than calling a man a woman, a woman a man, or a white a black.) You can’t paraphrase your country’s most closely guarded secrets, throw them to the winds, and expect anybody will buy the theory that the classified portions were somehow “laundered.” 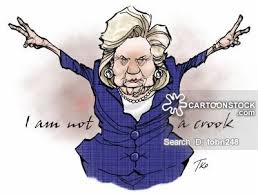 As long as the president wants Mrs. Clinton to be investigated, she is totally cooked.  Fricasseed. Barbecued.  Done.  Stick a fork in her dreams of the presidency.  I wonder if she has anything juicy on him?  Popcorn anyone?

1 Response to Mrs. Clinton, The Die is Now Cast — According to Ooobie