Dear Supreme Court: You Just Took Away the Best Part of Being Gay

“I’m not getting married.  I’m too GAY to get married.” — Tor McNair

Dear Supreme Court,What the HELL were you thinking.  I mean, yes.  We want full equality, but damn!  You have just ruined my life.

Before this decision, I could protest, pontificate (oops, poor choice of words) and complain about how I’m oppressed.  My lover Greg would listen with rapt attention as I’d go on an on about how this is so unfair.  He used to be such a dear.

You know what he asked me yesterday?  He wants to know when we’re getting married? 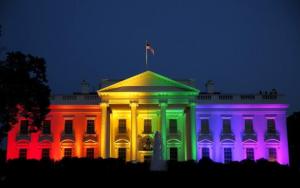 He might as well ask when we’re buying a minivan,  moving to the suburbs and raising fat children!

Now he’s all pissed off.  Well frankly so am I.  I think you’ve taken away the best part of being gay.  OK, maybe the second best part.

Last week I could tell Greg I’m going to an art auction and slip away to meet Carlos, my fave hairdresser.  Never mind what we’d do.  You don’t want to know.  We’d cuddle afterwards and that was it.  Yesterday I got a wedding invitation from Carlos and his longtime boy. That BITCH.  I gave him the best years of my life — ten minutes at a time. Besides, they’ve been living together for years.  They’re only having a wedding for the gifts.

Anonymous, promiscuous sex is grinding to a screeching halt.   Now the boys are starting to want commitment, rings and MY last name.

Okay, I wanted the right to get married but believe it or not, I’m not really interested in getting married.

This weekend, gay couples all over the country are having some of the most awkward silences ever.  This is just unfair.

Being gay means being ABLE to do a bunch of things, but that doesn’t mean I do them.  I have a list of things I don’t do.  Now I have to add getting married to the list.

Damn you people. Can’t you just leave us alone?