Alexander’s Law of Evil and Stupidity

Alexander’s Law of Evil and Stupidity: Of the two great negative forces in the world, stupidity will get you long before evil does. 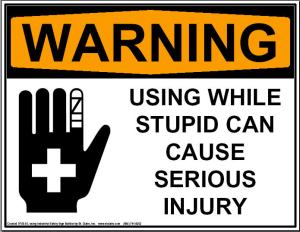 In fact, evil sleeps late, avoids heavy lifting and finds a way to quietly enter your life.  Stupid is a common thing.  (I’m aware I used an adjective as a noun. Thanks.)

Stupid is when hundreds of busses are left in parking lots and thousands are stranded in New Orleans as a slow-moving storm hits a city build below sea level, and next to a huge lake.

Stupid is when NASA sends a multimillion-dollar probe to Mars, but somebody forgets to convert English standard measurement into metric, and the thing crashes.

Stupid is when the rights of a nation are stripped away in favor of not offending some portion of the population.

Stupid is spending million dollars to stimulate the economy, and then discovering that the global economy is at risk because of government debt.

Stupid is parking your entire Pacific Fleet in a harbor, while participating in tense diplomacy with a country with an excellent navy.

Stupid is assuming that terrorists are the same as bank robbers or soldiers.

Stupid is deciding that the phrase “right to bear arms” really doesn’t mean the right to have, hold, possess or keep weapons.

Stupid is claiming that the First amendment was designed to limit religion, and to prevent people from being offended by religion.  Freedom for religion is not the same as freedom from religion.

Stupid is letting people push you around just because they say they are offended.  You know what offends me?  People flying planes into buildings full of people.  That offends me.

Stupid is judging people by the color of their skin or the type of church they attend.  InAmerica, we used to break God’s law by giving advantages to people based upon their color or tribe.  If we agree that is wrong, then please don’t ask me the color of my skin when I apply for a grant, loan or job.

Stupid is designing a computer system which identifies me, pulls an exact amount of money from my bank account based on my purchases, but that same system can’t remember if I speak English.

Stupid is asking me to press “one” for English. Let the other guy press a number for his language.  I was here first, and I speak the language of the nation.

Stupid is putting signs in hardware stores identifying items in the language of the immigrant.  I think every carpenter needs to know the name of his tools in the dominant language.  Same for the words “enter,” “exit,” and “bathroom.”  If I planned to stay in a country for any period of time, I’d learn those words right away.

Stupid is calling a white person racist for having an opinion about a black politician or public servant.

Stupid is thinking that there are two sides to every story, and each is morally equivalent to the other.  Tell that to the Jews at Auschwitz and the people in the towers.

This entry was posted in Stupid and Evil, Uncategorized. Bookmark the permalink.

1 Response to Alexander’s Law of Evil and Stupidity